For For years, we’ve identified CSS locations with physical keywords: top, right, bottom, and left. These words are tied to the physical dimensions of the browser viewport itself. Any property containing the word left is connected to the left edge of the browser window. Many properties use this physical location syntax (margin, padding, border, and the position-related properties).

We’ve been writing CSS like this for so many years, it’s hard to imagine changing the way we think about identifying locations. However, there’s a new evolution in the way we identify locations and directions in CSS, and it allows us to create much more robust layouts with less code! Let’s take a look at logical properties.

If you’re not familiar with “LTR” (left-to-right) and “RTL” (right-to-left) or vertical writing mode, I recommend reading Jen Simmons’ post on writing modes or watching her writing modes video.

The new keywords block and inline describe vertical and horizontal axes. To remember how these properties work, I like to picture a long paragraph of text.

The inline axis runs from the start to the end of a line of text in the paragraph. For LTR and RTL languages, that’s horizontal. Just like before, when you use inline properties in a vertical writing mode, the inline axis adapts and runs vertically.

Another way to describe these new axes is:

Now that we can use block and inline to identify vertical and horizontal dimensions in a way that adapts to writing mode, we can add start and end to identify which end of the axis we need to target. 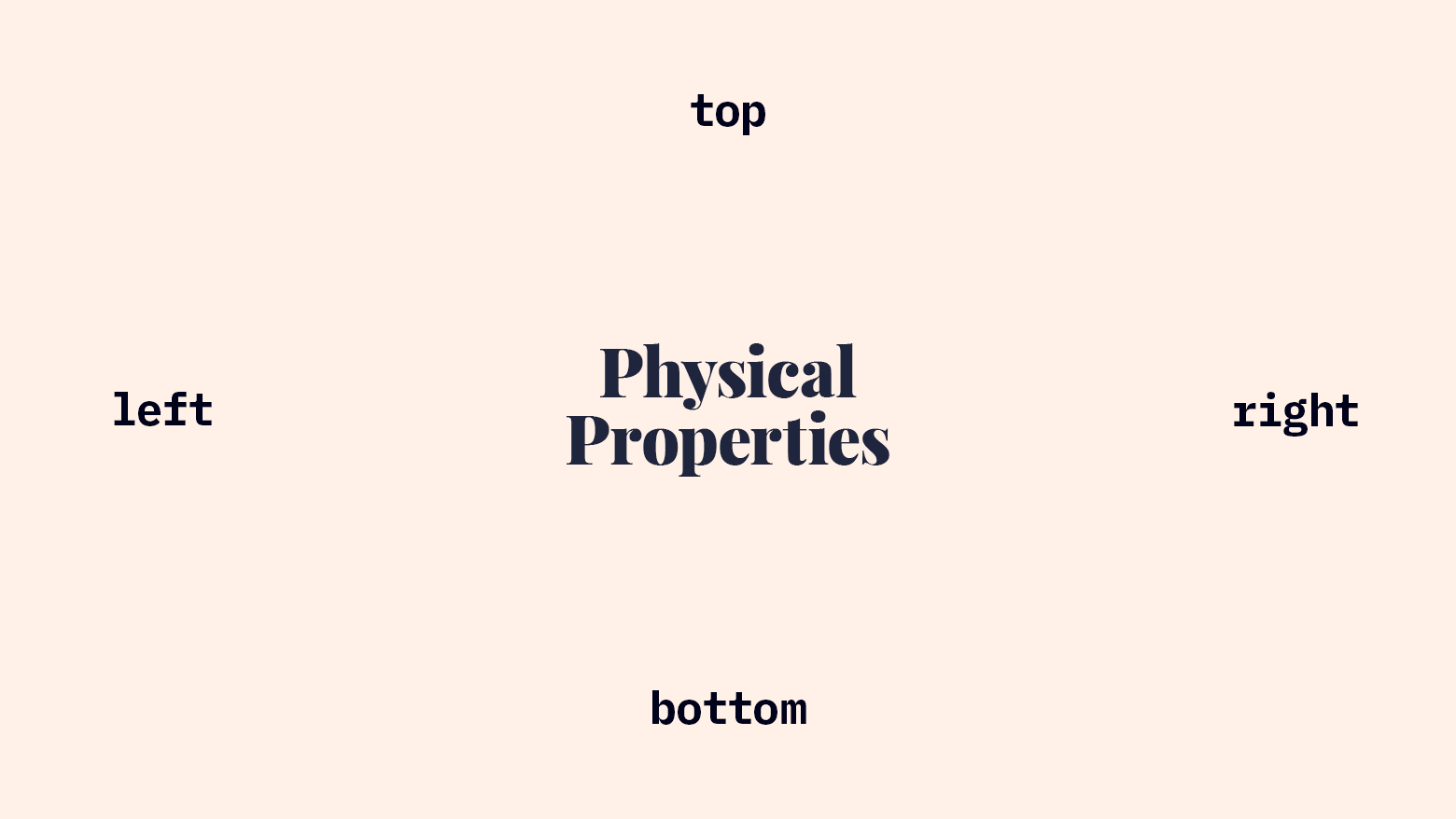 Now, watch how these properties respond to a change in localization. If our site is translated into Arabic or Hebrew, the dir="rtl" attribute will cause this change in the inline locations:

RTL is cool, but let’s check out the vertical text. Han-based languages (sometimes identified as CJK: Chinese, Japanese, Korean) can run vertically from right to left. If we were building a web app that would be localized for users reading these languages, we could support that writing mode by adding writing-mode: vertical-rl to the root element. Then our logical properties would adapt to match the rotated block and inline axes:

Let’s take a look at some examples of logical properties in real life!

Here are a few lists of logical properties and values:

Properties & Values that You Might Not Have Realized Are Logical

In Flexbox and Grid, justify-* and align-* use logical values.

Breaking these properties down helps us decide which to use.

Text Alignment in a Grid

To begin, here’s an example of logical properties at work in some code that may feel familiar to many front-end devs.

Let’s find the logical properties here. First, in justify-content - the grid columns will all be shifted to the start of the inline axis. In LTR, they’ll be at the left; in RTL, they’ll be at the right. Second, we’re overriding that start value for the location and hours. We always want that text to be aligned to the end of the grid, so we justify it with end. In the past, you might’ve just put text-align: right on that element (and then needed more CSS to override that in RTL mode). However, using Grid with justify-self: end, we get the same visual effect and it automatically switches for non-LTR writing modes.

And yes, text-align: end would produce the same effect as justify-self: end in this context.

I recently worked on a project with horizontally-scrollable rows. Each row had scroll-left / scroll-right buttons absolutely positioned at the left and right edges. The row used Grid layout, so as soon as we went RTL, it flipped automatically, but the buttons stayed put. Let’s use logical properties to solve that problem.

Using left and right would have caused RTL problems, but using inset-inline-* creates positioning that responds correctly to changes in writing mode.

You can use logical properties to make sure floated images are positioned correctly as well. With the existing physical properties, it was common to float images like this:

But now, with logical properties, we can make that more resilient:

However, that’s not the end of the story. I wish it were. It’d be great if logical properties worked as well as caniuse indicates!

First, a number of the properties I showed above are only supported by Firefox at the time of writing:

This means “non-supporting browsers” is a pretty large category. You still support some browsers that are at least partially non-supporting, even if you’ve dropped IE11. In this case, you could start writing logical properties now and use a PostCSS plugin called postcss-logical-properties to back-fill the old physical values. However, it’s worth noting that that plugin only supports LTR/RTL, not any vertical writing modes.

Without using that PostCSS plugin (which I haven’t tried out on any significant projects, so your mileage may vary), fallback CSS is a bit tricky. The fallback CSS requires an additional attribute selector ([dir="rtl"]) and that raises your specificity. That higher specificity now overrides your logical property code, even in modern browsers. In the code example below, the 2nd block overrides the 3rd even in supporting browsers, making the logical property effectively worthless. (@supports and @media queries don’t increase specificity.)

However, that’s a lot of code. In fact, you could delete almost half (6 of those 13 lines) and nothing would change. 😿

Unlike CSS Grid and some other areas where new CSS allows entirely new behavior, there’s no visible difference for users if you use logical properties with fallbacks. There are extra lines of code, I’m afraid.

As a rule, I don’t subscribe to the idea that “we shouldn’t use new CSS if we still need to write fallback styles.” However, in this case, writing logical properties with physical property fallbacks has significant specificity complications (which aren’t an issue with Grid). Additionally, the presence of merely partial support in Chrome and Safari makes fallbacks entirely necessary. Here’s a very detailed explanation of current shortcomings with logical properties.

At this point, my recommendation for implementing logical properties is cautious:

Even if your current projects and requirements don’t allow you to use logical properties in all the ways mentioned here, don’t lose heart! Support will continue to grow and browser support baselines will improve. Knowing this syntax will set up well to write better CSS in the near future.